​Pensacola Dam was built and completed in March 1940. Its completion and filling with water has formed what we now know as Grand Lake.  Since then, it has provided a fishing and recreation location for millions of people.  Until 1975 there was no formal education available for new boaters, except for the Coast Guard Auxiliary in Tulsa.  Boaters on Grand Lake drove their boats as they saw fit, with an increase in boating accidents. It became evident that boating education was needed.  In 1982 an idea for the first boating course was proposed to be given at Grand Lake by Members of the Tulsa Power Squadron. In 1988 there was a rendezvous and cruise at the first Pelican Fest on Grand Lake.  This brought up the idea of giving a boat course at Grand Lake.  In 1991 Joe Harwood, owner of the Arrowhead Yacht Club, asked D/C Bill Sherman to teach a Boat Course at Arrowhead Yacht Club.  In 1991 Tulsa Power Squadron had a booth at the Grand Lake in water boat show.  They advertised USPS and a boating course.  Also, in 1991 P/C Bob Fast summarized the USPS boating course in a seminar and introduced the teacher of an up coming boat course.  That boating course at Gran Terra was taught by D/C Bill Sherman for 21 students.  In 1992 a boating course was taught at Arrowhead Yacht Club, in the same year there was a boating course taught at the Grove Public Library.  Between 1993 and 1996 the boating course was taught on Grand Lake at various locations by members of the Tulsa Power Squadron.  In 1997 there were two classes taught, one at the Cherokee Yacht club, the second in the fall taught by Dave Rieden at his home in Grove.  In 1998 there was an organizational meeting to form a Division of the Tulsa Power Squadron at Grand Lake.  Baxter Thorman was the Division Commander.  In 1999 there was an organizational meeting held to change the Grand Lake Division into a Provisional Squadron of USPS. 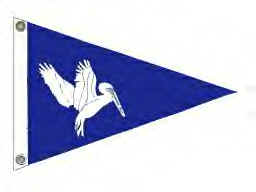 ​On 8 April 1999, a letter about the proposed burgee of the Grand Lake Sail and Power Division which will request a squadron charter at the USPS Annual Meeting in January 2000 was sent to the Flag and Etiquette Committee of USPS.  The proposed design is simple and easily recognized.  The blue background is symbolic of the blue water and blue skies of northeast Oklahoma.  The While Pelican arrives in March and again in September, staying until late November during its north and south migration.  The importance of the While Pelican to the community is celebrated during September with the annual Pelican Festival
​REMARKS:  Tulsa Instructors who taught the Boating Course (or portions of it) at Grand Lake in the early years and were, therefore, instrumental in helping Grand Lake became a Squadron were Bill Sherman, Brian Tulley, Bob Fast, Doug Gaither, Earl Rose, and David Rieden.  Many others such as Orville Edwards (Tulsa Sqdn.,ASEO, then SEO), Jim Dodge, P/C George Bynum, and P/Lt/C Kyle Tidwell supported the classes as proctors and also handled local publicity.  Baxter Thorman was Grand Lake’s Division Cdr. Provisional Squadron Cdr., and its first Squadron Commander. 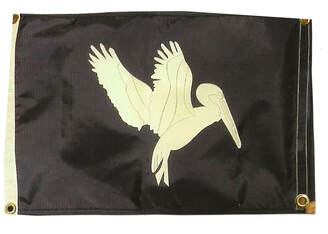 A dock flag was also designed by squadron members to be used to signify GLSPS members living on the lake. This flag should be flown in a visible location. This was to notify members that there was a location to find a safe harbor of an emergency or to visit with friends.
​
Compiled by Pegy and Bill Miller
May 2, 2021
Historical Summary of District 31
An Article describing the Origins and History of District 31 follows
Click on this link
D31 History
Proudly powered by Weebly
Photo used under Creative Commons from Jeffrey